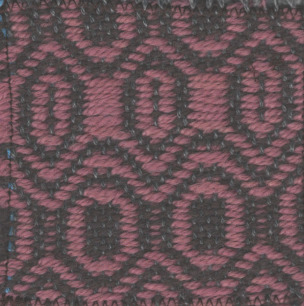 This overshot sample is from the 1975 edition of The Handweaver’s Pattern Book by Marguerite P. Davison. The pattern uses hand dyed natural materials for the weft by Dawn Andersson. The purple was dyed with umbilicaria lichen in an orchil process, on alum mordanted yarn. The brown yarn, used for the tabby,  was iron mordanted and dyed with smoke tree leaves. The warp was cotton.

The loom and space for this project was generously provided by Phyllis Fredendall at the Finlandia University International School of Art and Design. Guild members Mary Brownell, John Gate, Kathie Joyce, Marilyn Midkiff and Carle Zuraw wove and finished the samples. 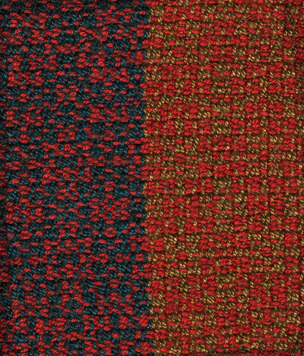 Michigan Weavers Guild celebrated their 70th anniversary in 2018. They chose this weave structure because it is from that time era, giving our sample historic significance. Harriet Tidball introduced Chromatic Texture in her Shuttle Craft newsletter in 1952. She also called it Extended Point Twill. Looking closely, we can see that this is also crackle threading. To make it more modern we added iridescence to the fabric  Weavers were: Leigh Ann Mills, Loretta Oliver, Sue Walton and Cynthia Wayne. 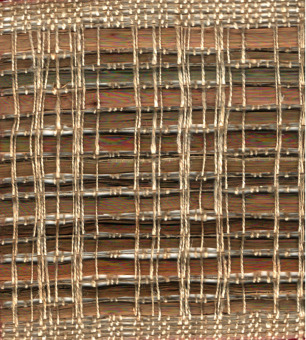 Our state has an abundance of natural resources and we wanted to highlight that in our samples. This year our study group focused on the “overshot” structure. We have chosen “Cats Paws and Snail Trial (Wandering Vine)” for our threading. Our warp is 18/2 Dryspun Hemp and for the tabby 20/1 Linen and cattail leaves for our pattern weft.

The cattail leaves were harvested during their peak and dried in the shade, outdoors, turning several times, then stored in a cool dry place. Before weaving with them,  they soaked in water for 4-6 hours, wrapped in a towel and plastic, then left to mellow for 30 minute We had a “cutting party” to split the leaves in thirds lengthwise. To keep them for getting mildew or mold the damp bundles were stored in the refrigerator/freezer until we started weaving, 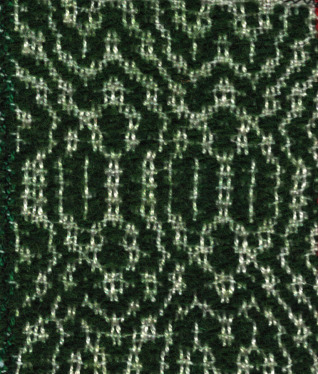 This Guild, formed in 1973 in Traverse City took overshot in another direction: a name draft. The treadling repeats create a lovely design. It is interesting to note that they used a Leclerc Dorothy and a Dorset loom, looms which would have been used at the same time that some of these drafts were created.